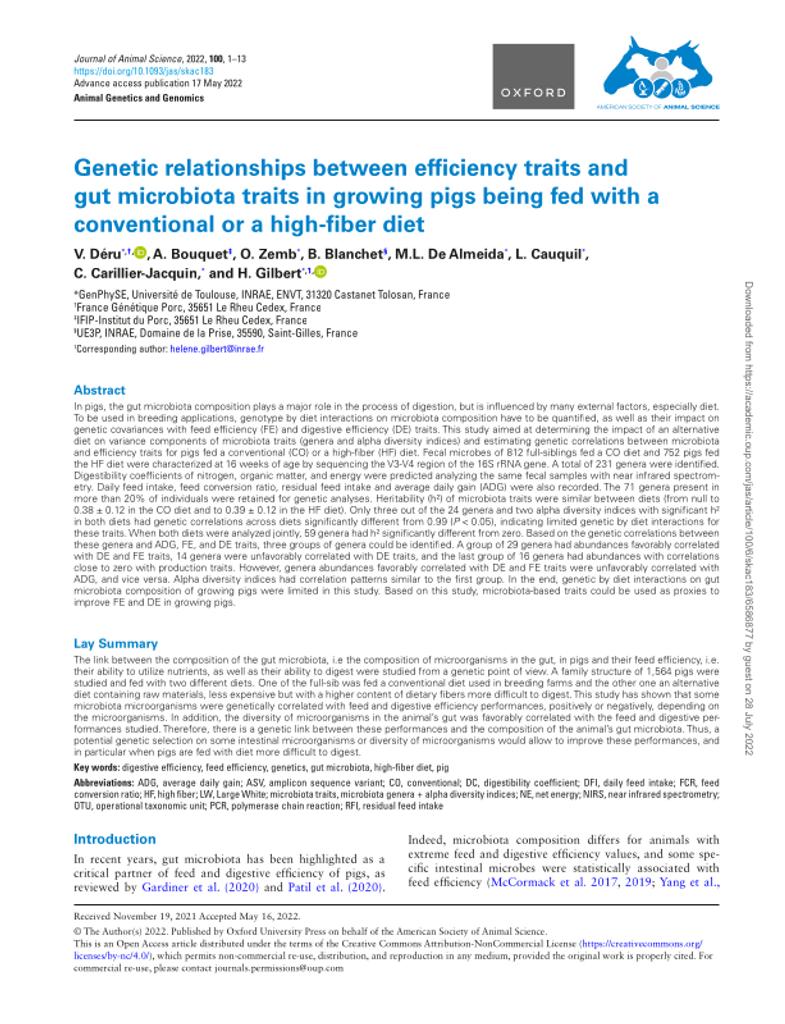 Ajouter à ma liste
Auteurs : Déru V, Bouquet A, Zemb O, Blanchet B, De Almeida ML, Cauquil L, Carillier-Jacquin C, Gilbert H
In pigs, the gut microbiota composition plays a major role in the process of digestion, but is influenced by many external factors, especially diet. To be used in breeding applications, genotype by diet interactions on microbiota composition have to be quantified, as well as their impact on genetic covariances with feed efficiency (FE) and digestive efficiency (DE) traits. This study aimed at determining the impact of an alternative diet on variance components of microbiota traits (genera and alpha diversity indices) and estimating genetic correlations between microbiota and efficiency traits for pigs fed a conventional (CO) or a high fiber (HF) diet. Fecal microbes of 812 full-siblings fed a CO diet and 752 pigs fed the HF diet were characterized at 16 weeks of age by sequencing the V3-V4 region of the 16S rRNA gene. A total of 231 genera were identified. Digestibility coefficients of nitrogen, organic matter and energy were predicted analyzing the same fecal samples with near infrared spectrometry. Daily feed intake, feed conversion ratio, residual feed intake and average daily gain (ADG) were also recorded. The 71 genera present in more than 20% of individuals were retained for genetic analyses. Heritability (h²) of microbiota traits were similar between diets (from null to 0.38 ± 0.12 in the CO diet and to 0.39 ± 0.12 in the HF diet). Only three out of the 24 genera and two alpha diversity indices with significant h² in both diets had genetic correlations across diets significantly different from 0.99 (P < 0.05), indicating limited genetic by diet interactions for these traits. When both diets were analyzed jointly, 59 genera had h² significantly different from zero. Based on the genetic correlations between these genera and ADG, FE and DE traits, three groups of genera could be identified. A group of 29 genera had abundances favorably correlated with DE and FE traits, 14 genera were unfavorably correlated with DE traits, and the last group of 16 genera had abundances with correlations close to zero with production traits. However, genera abundances favorably correlated with DE and FE traits were unfavorably correlated with ADG, and vice versa. Alpha diversity indices had correlation patterns similar to the first group. In the end, genetic by diet interactions on gut microbiota composition of growing pigs were limited in this study. Based on this study, microbiota-based traits could be used as proxies to improve FE and DE in growing pigs.